The Honorable Tayloe Murphy served conservation in Virginia with distinction. A longtime member of the Northern Neck Land Conservancy, Tayloe served in the Virginia legislature for 18 years where he achieved a long list of accomplishments the greatest perhaps being passage of the Chesapeake Bay Preservation Act in 1986 and its renewal in 1996, despite the political peril of imposing state authority on local land use decisions in his conservative district. He also sponsored legislation regulating nutrient runoff from agricultural feedlots and boat paint pesticides into Chesapeake Bay. Murphy served on the Chesapeake Bay Commission (1980-1999), including his time as chairman. In 2002 Tayloe was appointed Secretary of Natural Resources under Virginia Governor Mark Warner.

Tayloe and his wife, Helen were members of the NNLC since its inception in 2004. 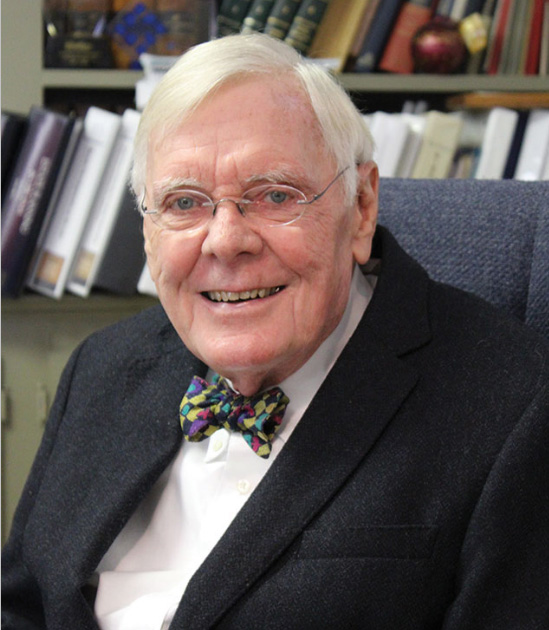 A note from our Board Chair and Executive Director

We wanted to keep you informed of Northern Neck Land Conservancy activities during this unprecedented time.

NNLC’s work, conserving the land you love, continues. If you need to contact us, please do so through email info@nnconserve.org.. We will respond to you in a timely manner!

We encourage you to get outside, with appropriate social distances, and enjoy the beauty that is the NNK.

After much thoughtful discussion, we want to let you know that we have decided to reinvent NNLC’s major outreach and fundraising event – Boots and BBQ. The NNLC Board of Directors felt there are several items that could impact holding a large community event.  Rest assured; we are making plans for the new “Boots”.

NNLC work goes on in the field and online! 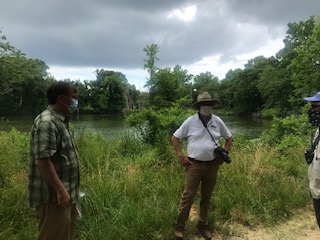 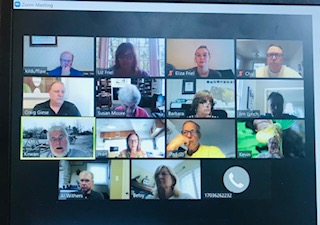 “You can help keep the Northern Neck bountiful and clean.”

Join Us - Become a Member Today

NNLC is pleased to have just conserved a stunning historic 564-acre area of land. The Haywood Farm is nestled on the Potomac River, just a stone’s throw from the George Washington’s Birthplace National Monument. A huge thank you to our conservation partners, the property owners, the Latane family, the Trust for Public Land and the Navy who authorized Readiness and Environmental Protection Initiative (REPI) funding for the easement. 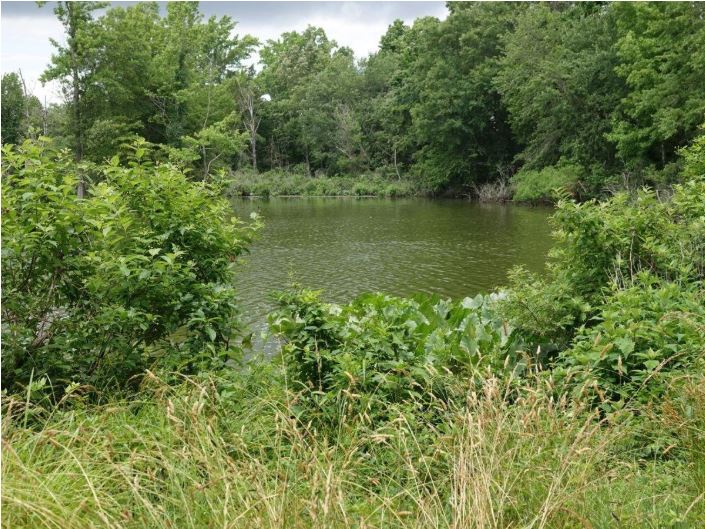 Farm pond on the Haywood Easement 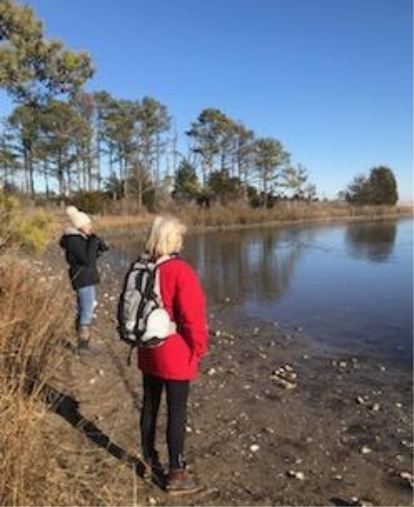 NNLC and Nature Conservancy Board Members view the Bayview site along Balls Creek.

Lancaster, Va. — To commemorate the 50th anniversary of Earth Day, the Northern Neck Land Conservancy and The Nature Conservancy have announced their new partnership to protect an ecologically-significant property in Virginia’s Northern Neck.

Last month, the Northern Neck Land Conservancy secured an environmentally-sensitive, 225-acre site near Dameron Marsh in Northumberland County. Known locally as “Bayview,” the site is located near the intersection of Balls Neck Road and Balls Lane and has extensive Balls Creek and Chesapeake Bay frontage.

Lancaster, VA Since 2004, the Northern Neck Land Conservancy has partnered with conservation-minded landowners to place over 5,000 acres of Northern Virginia in conservation easements. Their conservation work is driven by a desire to preserve the natural and cultural heritage of the Northern Neck, a peninsula of Virginia bordered by the Potomac and Rappahannock Rivers. 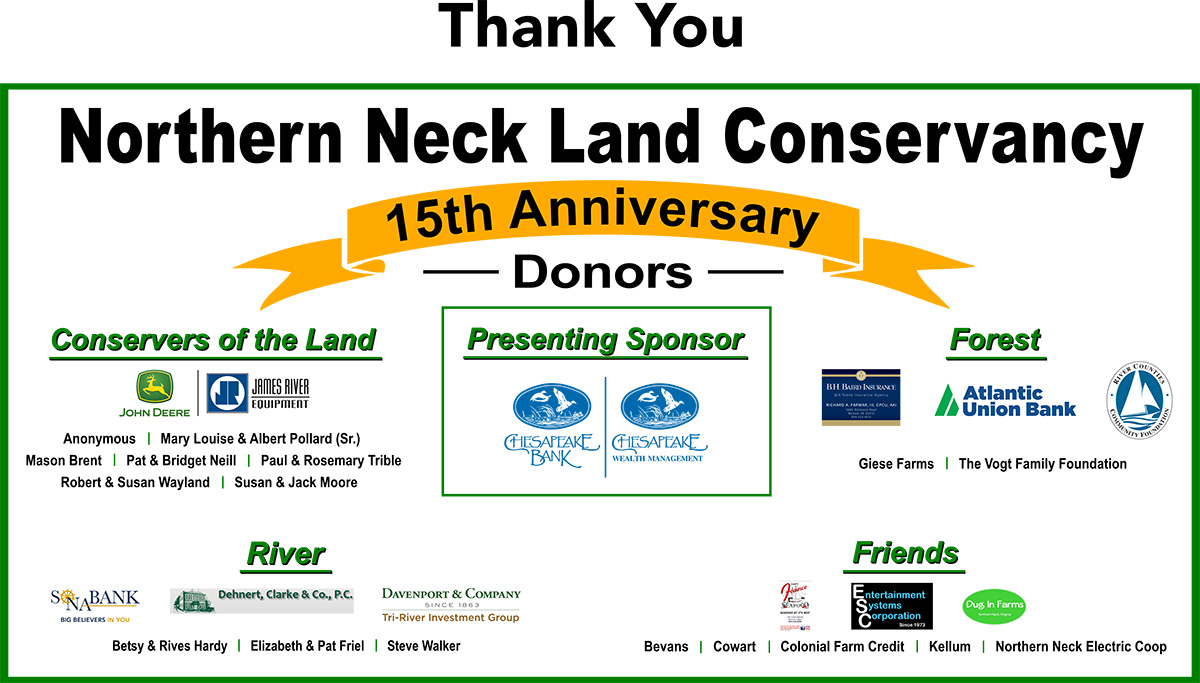 The Northern Neck Land Conservancy (NNLC) celebrated its fifteenth anniversary with its annual fund raiser and garden party, Boots & BBQ, September 28, 2019. A sold-out event with well over 300 people in attendance, the gathering was held at the historic Ditchley property which is now a working farm, cidery and a private event venue.

Sunny calm weather, historic venue, made-on-site hard cider, beer and wine, great music (the Gurleys) and fabulous food (Angelo’s of Montross) was savored and enjoyed by all in attendance. Many conservation easement holders were in attendance and this celebration was, in part, a tribute to their progressive outlook to preserve their land in perpetuity. 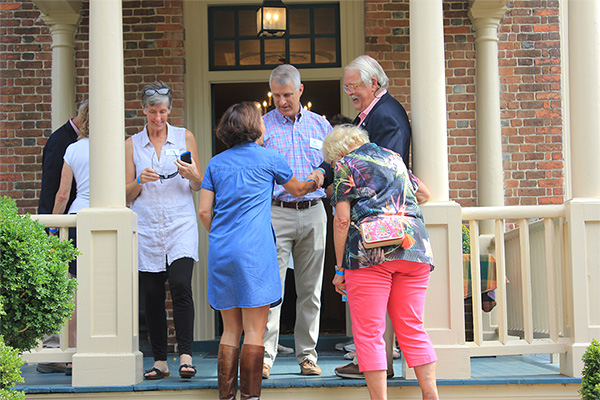 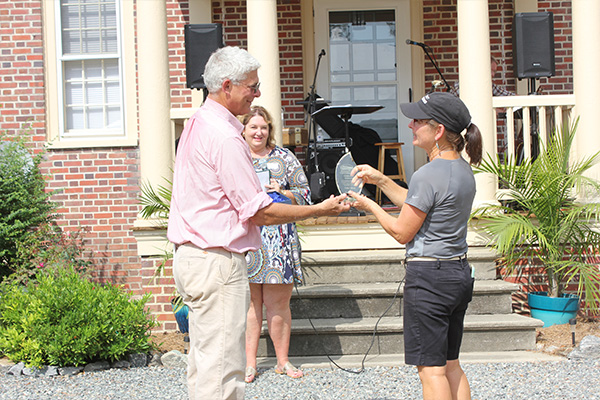 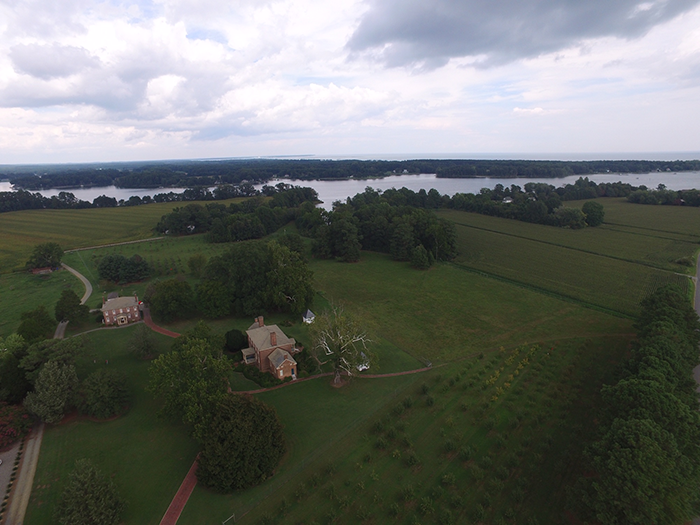 Lancaster, VA (Nov. 6, 2019) – One thing that unites us as a nation is land: Americans strongly support saving the open spaces they love. Since 2004, the Northern Neck Land Conservancy (NNLC), has been doing just that for the people of the Northern Neck. Now that NNLC has announced it has renewed its land trust accreditation – proving once again that, as part of a network of over 400 accredited land trusts across the nation, it is committed to professional excellence and to maintaining the public’s trust in its conservation work.

Preserve the Land You Love

The Northern Neck Land Conservancy is a small non-profit land trust on the Northern Neck of Virginia, a peninsula located between the Potomac and Rappahannock Rivers and bordering the Chesapeake Bay. Water surrounds our area and in order to keep it bountiful and safe for fishing, crabbing, swimming and drinking, we need a clean environment with protected stream banks, expansive woodlands, attentive farming and citizens who choose to safeguard the environment from pollutants. We help landowners who want to voluntarily protect their lands with permanent conservation easements to ensure that their property sustains the rural character of the Northern Neck and maintains a healthy environment for future generations. Check out what we are doing by reading this local news article!

Stay informed on topics that matter to you by getting the latest news. Join us for our next event.

Discover who we are and the land we are passionate about.

Let’s keep the Northern Neck a wonderful place to live, work and visit.